Thousands rallied across the United States on the eve of the House of Representatives' landmark votes on whether to impeach President Donald Trump for abuse of power and obstruction of Congress.

Rallies were held from Washington, DC, to New York City and St Paul, Minnesota to Phoenix, Arizona, with protesters demanding Trump be impeached over his dealings with Ukraine.

"No one is above the law," read one sign in Salt Lake City, Utah. "We already went over this, America does not want a king," read another in Chicago, Illinois.

The rallies came as the House prepares to vote on Wednesday on two articles of impeachment - abuse of power and obstruction of Congress - against Trump. The votes are expected to largely play out along party lines in the Democratic-controlled House.

Impeachment in the 435-member House must be approved with a simple majority.

Democrats accuse Trump of pressuring Ukraine to open an investigation the president's political rival and former vice president, Joe Biden, who is also a frontrunner in the 2020 Democratic presidential race. They also charge that the president obstructed their investigation by refusing to comply with subpoenas and directing members of his administration to do the same.

Trump has denied any wrongdoing, and on Tuesday, sent a blistering letter to House Speaker Nancy Pelosi, accusing Democrats of an "attempted coup" and that if the moved forward with impeachment they would be "declaring open war on American democracy".

"I have no doubt the American people will hold you and the Democrats fully responsible in the upcoming 2020 election," Trump said. "They will not soon forgive your perversion of justice and abuse of power." 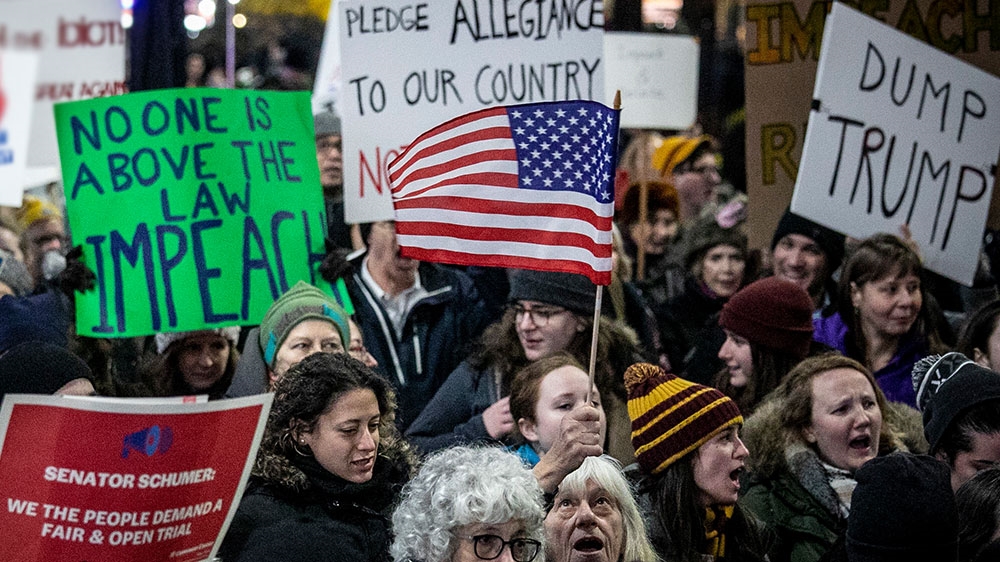 Pelosi wrote her own letter, urging her colleagues to "support and defend our constitutions from all enemies, foreign and domestic".

"Tomorrow the House of Representatives will exercise one of the most solemn powers granted to us by the Constitution as we vote to approve two articles of impeachment against the president of the United States," House Speaker Nancy Pelosi said in a letter to fellow Democratic legislators on Tuesday.

The impeachment process has deepened political divides in the United States as the country heads for the 2020 presidential election.

A running average of polls of US public opinion compiled by RealClearPolitics.com suggests 46.9 percent of Americans say Trump should be impeached and removed from office, while 47.6 percent say he should not be impeached. But the polls suggest Americans are starkly divided along partisan lines.

According to RealClearPolitics.com's national average of polls, 83 percent of Democrats support impeachment, while 88 percent of Republicans do not. 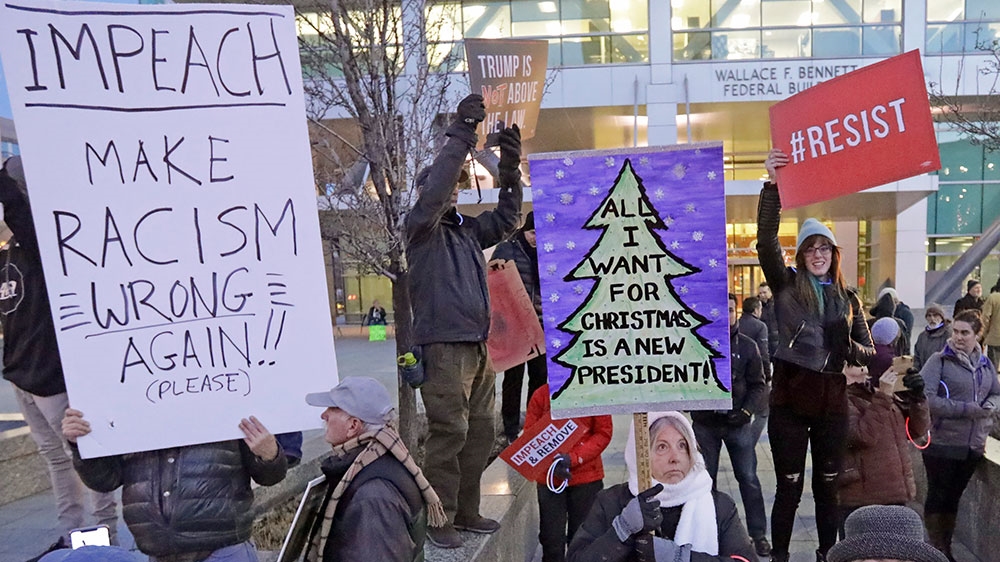 On Tuesday night, hundreds of rallies in favour of impeachment were organised by a coalition of liberal groups, including MoveOn.org and Stand Up America. Organisers said more than 200,000 people were expected to attend.

In Raleigh, North Carolina, a small group of protesters sang an impeachment rendition of the holiday song, "We wish you a Merry Christmas".

"The temperature is below freezing but hundreds of people in Salt Lake City are rallying for the rule of law and democracy. We demand Congress does its job and #ImpeachDonaldTrumpNOW," Twitter user Travis McKnight tweeted.

"Our hearts are warmed seeing each other, making some noise together. When you know you are on the righteous side of history," tweeted Barbara Malmet who rallied in New York City.

US media reported that smaller groups of Trump supporters also held counter-rallies in some cities, calling for Trump's re-election.

Wednesday's proceedings will kick off at 9am (14:00GMT) with debate on the rule governing the longer impeachment debate. After the rule is approved, there will be six hours of debate, divided equally among Democrats and Republicans. Final votes are expected in the afternoon or early evening.

If the House votes against Trump, he would become only the third president in US history to be impeached.

The articles would then go to the Republican-led Senate for a trial, which is expected in January. No US president has ever been convicted and removed as part of the impeachment process, and there is no indication at this point that things will change in the new year.

US to deepen support on security and peace building in Plateau...

China, a strategic partner in the actualsation of my administration’s change...